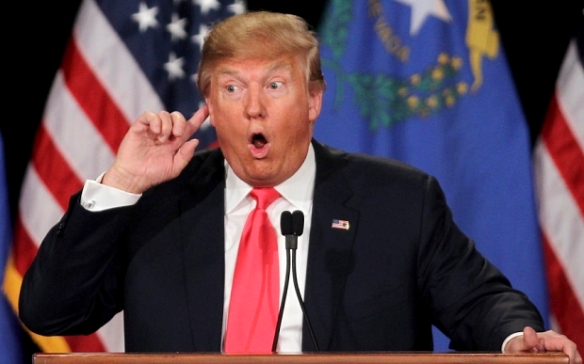 In 1979, Dead Kennedys released “California Über Alles,” a satirical attack on then-California Governor Jerry Brown and his “Zen fascists.” It was rumored that Brown would challenge Jimmy Carter for the 1980 Democratic nomination (which he briefly did); DK lead singer Jello Biafra imagined a New Age Nazi regime where jogging and mellow vibes would be mandatory.

Funny for its day.

Brown never became president, but Ronald Reagan did, bringing with him a darker blend of fascist notions. Biafra’s parody of Brown was suddenly pointless. He rewrote the song, casting Reagan as an American Shah bent on war and Christian conformity. It was re-titled “We’ve Got A Bigger Problem Now.”

Is Trump worse than Reagan? Hard to say this early in, but the signs aren’t encouraging. I don’t recall this much craziness at Reagan’s dawn — and Al Haig was Secretary of State! (“Scary man, with morals of a styrofoam cup” as SNL put it at the time.) But then, elites were pretty comfortable with Reagan who was much more popular than Trump. There’s nothing like an unstable narcissist to drive a wedge into the so-called “consensus.”

As we’ve seen, liberal reaction to Trump is all over the place, ranging from conspiracy theories to left-bashing to calls for a military coup (Sarah Silverman’s brilliant suggestion). Marches and demonstrations have increased (I went to three in one week), and there are pleas for a general strike or anything that will slow if not hinder the machine. Bernie Sanders’ campaign anticipated this, but it took Trump to get liberals off their asses and into the streets.

It’s nice to see liberals arise from their eight-year slumber. I don’t know how long it will last or how deep their waking commitment runs, but with President Trump there is no lack of stimulation. Of course, mainstream Democrats remain loyal to the system, regardless of who’s managing it. For many, Trump loses on style points, not for using the weapons honed and passed on to him by Obama. And in case anybody was confused, Nancy Pelosi reminded us that capitalism rules.

Some radicals are opting for more direct confrontations. After fascist dweeb Richard Spencer got sucker punched in DC, and a group of demonstrators aggressively shut down an appearance by alt-right celeb Milo Yiannopoulos in Berkeley, violence is being considered as a viable tactic. We’ve been here before, usually with disastrous results (there are those who think that the anti-WTO protests in Seattle in 1999 were successful, but somehow global capital survived). I suppose each new generation must experience this personally, so we’ll see how violent resistance flies this time around.

I would counsel my young, eager radical friends to think this through. Captain America knocking out Hitler is cute, but physically confronting domestic fascists carries serious risks. Unless you’re armed or know how to fight, chances are good you’ll get the worst of it. Ask the survivors of the Greensboro massacre of 1979, where communists took on the Klan and paid dearly, five with their lives. And don’t forget the fascist-minded in uniform, who have the increasing power of the state behind them. Something to consider before donning the black mask.

It appears, dear ones, that we are in deep shit. And it’s only just begun.